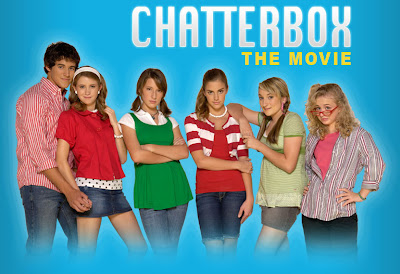 Chelsea, a 13 year old girl, wants to be popular and prove to her parents that she’s as good as her brother BRYAN, a star football player, and her sister ANGEL a college scholarship winner. She is going to do this by winning the national Chatterbox competition held every year in Washington DC. Chatterbox is a contest where female representatives from middle schools across the country are chosen by their classmates and faculty to compete against each other demonstrating talent, popularity, knowledge and concern for their community.
With the help of her two best friends STEPH and TINA, Chelsea, against her parents wishes, enters the local Chatterbox competition. The schools Principal explains to the students that the local Chatterbox competition consists of three levels. To win a contestant will have to campaign to collect classmate and faculty signatures to finish in the top 50. Next they have to take an exam showing their knowledge and score in the top 10. Finally only 5 of them will compete in a community project where they have to develop and implement an idea then make presentation to the entire schools about it. After the presentation faculty and community leaders will select the winning girl to represent the school.
Chelsea’s main rival is Valerie a snooty, snobbish girl from a very well to do family. With the help of her friends Steph and Tina they enlists Jess, Valerie’s former friend, to be a spy for Chelsea and to help them. But Jess has devious reasons of her own for helping Chelsea, she wants to get back at Valerie by any means. She talks Steph and Tina into cheating and then undermines Chelsea’s friendship with them. Valerie is underhanded too and sends her boyfriend ALEX, the coolest and most popular boy in the school to spy and get information from Chelsea and her friends. Alex and Chelsea’s relationship blossoms as he gets to know her and sees Valerie for who she really is. Jess drives a wedge between Chelsea’s and her friends, Alex, and her family by trying to turn Chelsea into a different person who is only interested in herself and winning at all costs.
Chelsea wins the competition but when she discovers the cheating she gives up the Chatterbox title and makes a public apology where she talks about the importance of friends and family and that being popular at any cost is just not worth it, that honesty, loyalty, family, and being true to yourself are more important. [*]